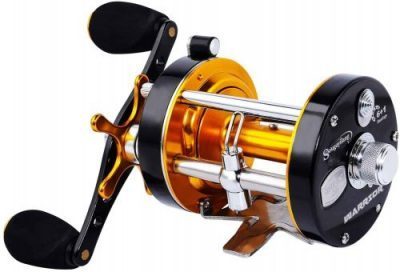 Sougayilang is a Chinese brand which has built a reputation for manufacturing precise, innovative and high quality products. This is readily apparent in the Sougayilang Warrior 4,000, a baitcasting reel which is dependable, reasonably priced and comes with after sales support.

This product is designed for both amateur and experienced anglers. Unlike other baitcasting reels, which are limited to freshwater habitats, the Sougayilang Warrior 4000 can be used in both salt and freshwater, and works best with twelve, fourteen or sixteen pound testing lines.

Those that love fishing for salmon, catfish, pike, walleye, bass trout or flounder won’t go wrong with this fishing reel. While many baitcasters are restricted to right hand users only, the Sougayilang 4000 is ambidextrous. However, it does have some drawbacks. It is not the best reel for capturing bigger species such as marline, tuna, shark or muskie, so those that intend on catching these species will need a heavier line.

When you purchase this baitcasting reel, the package will include a single fishing rod, cranking handle that is fully assembled and spare graphite spool. Because it has 13 ball bearings, the handling is ultra-smooth with a single anti-reverse, instant stop bearing. You’ll notice the difference when reeling in fish due to the superior build quality, yet it is still affordable when compared to competing products.

A brief inspection of this product will quickly reveal that it was designed with high quality components. For example, the gears are made with precision brass and the ball bearings are corrosion resistant, which are the hallmarks of professional design. Additionally, the main shaft is comprised of hardened metal while the pinion gear is precision machined. This maximizes the ability of anglers to tackle tougher fish.

It isn’t unusual for anglers to spend all day or night fishing. Older baitcasting reels were problematic due to their excess weight, which would place unnecessary strain on the hands and wrists after extended use. The engineers at Sougayilang resolved this problem by developing a revolutionary hollow frame structure which reduces the weight without compromising durability. This is due to the premium parts and aluminum spool which is light yet sturdy. The end result is a baitcasting reel with superior line capacity when compared to competing products.

A growing number of anglers are using online reviews to influence their buying decision. So far, the Sougayilang Warrior 400 has at least 200 user reviews and this will grow as more fishermen become aware of this company and its products. Eighty percent of customers have given the reel a four star rating or higher with more than sixty percent saying that it should get five stars. Specifically, users praise its quality casting, solid hooksets, and comfortable handling even after extended use.

A dependable and well suited reel should be considered the cornerstone of successful angling. Because of the many different fishing environments that anglers operate in, it isn’t unusual for them to own multiple reels which are suitable to the different habitats. While baitcasting reels such as the Sougayilang Warrior 4000 can be used in fresh and saltwater environments, it is important to know the differences between the two.

Saltwater fishing reels are designed to handle the rigors of open sea fishing, which is extremely demanding due to salt’s corrosive properties. This is why every high quality saltwater reel is made with either graphite or fiberglass and sometimes both. Fiberglass is preferable to graphite since it is stronger.

It should also be noted that saltwater fish have a broader size range than their freshwater counterparts. This means that any rod used for sea or ocean fishing must be capable of handling heavier weight. When performing a side-by-side comparison of salt versus freshwater reels, you’ll notice that the saltwater rods are both heavier and thicker. Freshwater reels come in many types that include closed spin casters, spinning, telescopic, ultra-light and carbon fiber. Saltwater reels are typically used for jigging, trolling, spinning and bait casting.

Another thing you’ll notice is that open sea fishing reels feature sealed casings. These are designed to keep the saltwater out. The external covering will usually be anodized to provide extra corrosion resistance, and most experienced anglers will warn beginners never to use freshwater reels in the ocean, otherwise they will rapidly rust, corrode and become damaged.

The majority of baitcasting reels designed for sea fishing are defined as low or high speed. Higher speed reels are those which have gear ratios above 6:1, which means anglers can retrieve rapidly. The lower speed reels will typically have ratios which are fewer than 4:1. Although slower they also provide greater power when tackling heavier fish.

Another key feature found in almost every high end baitcasting reel including Sougayilang products is the level wind mechanism. Its purpose is to stop snagging and line trapping while casting lures. Open bail based spinning reels will be mounted underneath the rod and use a spool which is fixed. Spin casting based reels which are closed will use a line which will be thrown from the spool which is fixed without a line roller or larger wire bail. These reels might also be outfitted with 1 or 2 pickup pins, as well as the metallic cup for the winding of the line in the spool.

Another term that you’ll frequently hear anglers use when referring to fishing reels is the capacity. Fresh and saltwater reels differ when it comes to the capacity of their line. The line capacity will usually be indicated in the reel’s body and must always be aligned with the line weight that is recommended for the reel. Since sea fishing requires bigger lure weights to catch heavier fish, their line capacity also needs to be larger than freshwater fishing.

How to Use the Sougayilang Warrior 4000

It is important to maintain this fishing reel properly, especially if you intend on using it for saltwater fishing. The equipment must be rinsed off using freshwater and this includes the rod and fishing reel itself. Any salt or sand which is present should be completely eradicated.

It is recommended to use a light hose or spray because if the water jet is too heavy it might get inside the fishing reel and damage it. Those that need to perform deeper cleaning should disassemble the reel and then place lube on its working parts.

Which pole goes with this baitcasting reel?

Users have reported being able to place it on nine foot moderate action for long distance casting.

What is the highest pound test?

Twenty five pounds should be considered the maximum, but the Sougayilang Warrior 4000 was not designed for heavy fish, so you’ll want to use it for small to medium sized species. Those who have attempted to tackle bigger have said they were unable to adequately tighten their drag.

Does the Sougayilang Warrior 4000 feature an auto engage based thumb bar or does it have to be engaged manually?

It has auto engage. Once you turn its handle it will activate.

What is the width of this reel and what level of line can it hold?

The line capacity and width will be determined by the reel’s size, so it can range from 4,000 to 6,000, but most estimate that the Sougayilang Warrior 4000 is about the size of the Abu Garcia C3.

How well does this reel work in salt water?

This baitcasting reel is exceptionally versatile and can be used in saltwater, but some anglers recommend a larger one because it is better suited to catching heavier fish like black bass.

How loud is the clicker?

Sound sensitivity will vary from user to another, but most of the fishermen who’ve tried the Sougayilang Warrior 4000 have stated that it sounds just right.

Does this reel work for left handed users?

Yes, it can be used by lefties. Those that turn its crank using their left hand will require a left handed reel.

There are fishing scenarios which require finesse, and there are others that need brute force. The Sougayilang Warrior 4000 can be used for both. Its sturdy aluminum frame, handle arm, side plates and spool give it a level of performance which stands out from the crowd. The interior is made with high quality materials and parts and it works well with lines that are braided. Since the level wind is continuously engaged, the line flow is even, which makes this reel comfortable to handle. Its only drawback is its inability to tackle heavier fish, but those that only wish to catch small to medium sized species will find this to be the perfect product.