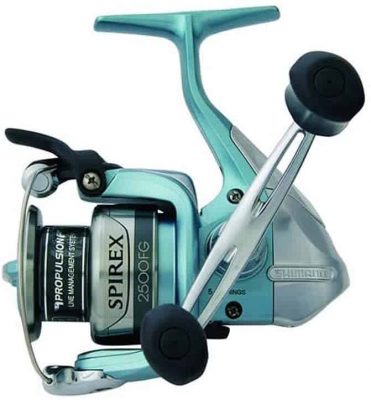 Spinning reels offer the user a very easy-to-use and effective method of casting and retrieving, and the Shimano Spirex 2500FG is a very good showcase of a well-made spinning reel. By all standards, this reel is a good option for fishing purposes and performs well in a variety of situations.

The Shimano Spirex 2500FG is quite a new reel on the market, but it has already made quite a splash and securing itself as a competent and well-made fishing reel. Just taking one look at the reel you can see how pleasing it is to the eye, but the good things about this reel don’t stop there.

A lightweight graphite frame and comfortable rubber handle grips are just two of the features that this reel brings along with it. Out of the Spirex FG line of reels, this one sits in the middle being made for moderate fishing in saltwater conditions and offering only moderate drag.

Being slightly heavier than the 1000FG does make it better suited for fishing medium fish or even smaller sized fish. It clocks in at just around ten and a half (10.6oz) ounces and sports a gear ratio of 6:2:1.

You get five stainless steel bearings contained within the reel along with one extra that comes with the reel when you buy it. That’s good because if any damage happens or something unexpected occurs and you need to replace a bearing you can do so without needing to purchase another.

For max drag, you can expect 9 pounds, and the retrieve comes in at 32 inches for each revolution you complete on the handle of the reel. You can also use this reel with a braided line, making it more versatile and open to more options.

This is a reel that performs well in saltwater and freshwater environments, so use it wherever you please.

You can expect to find well-made bearings in the Shimano Spirex 2500FG.  With five in total, you get a very smooth response when casting or retrieving, and they will last you a long time even when using braided lines.

Every bearing that comes with the Shimano Spirex 2500FG features the same type of specifications as Shimano’s other products that sport A-RB bearings. The upside to the bearings present in the 2500Fg is that they are entirely shielded, keeping them safe from damage and wear.

You will notice that the Shimano Spirex 2500FG spinning reel’s bearings have shields on either side of the bearing itself. This helps to increase the service life of the part so that you can use your reel longer without needing to replace the bearings.

It achieves this by blocking the dirt, grit, salt, and other materials from getting inside, and does so much better than models that sport only a single shield.

The Spirex 2500FG also comes packed with ultra-durable cold-forged aluminum spools. Cold-forged options are more desirable than other types of aluminum spools due to their added durability.

This can be attributed to the process of cold forging, making the spool more resilient and resistant to damage than other spools that may be made out of die-cast or composite types of aluminum.

If you are looking for a reel that comes packed with spools that you can be sure will last you quite a long time, then the Spirex 2500FG with its cold-forged spools is a very good choice.

This feature is something that is unique to Spirex FG reels and refers to the mechanic that is featured in the rotor of the reels themselves. Every Spirex FG rotor, including the 2500FG, is balanced in a way that resembles a car wheel.

Shimano refers to this feature as the Dyna-Balance rotor, and it helps to deliver a rotor action that is entirely free of any sort of wobble or vibration. This is a great feature as it not only makes fishing overall easier when using this reel, but it also cuts down on the fatigue of the angler significantly, while also serving to enhance the overall service life of the entire reel.

Now we can see another feature that Shimano has built into its FG series of reels that makes it more durable and long-lasting. The great thing about the Dyna-Balance rotor is not only that it is tough, but that it affords much more comfort to the angler.

If you are looking for a reel that can increase comfort over long fishing trips while remaining durable then the Spirex 2500FG is a good choice.

Yet another feature that the Shimano Spirex 2500FG sports is the Fluidrive II system. Shimano has actually crafted Fluidrive technology before, and this is the second generation that they have produced.

Fluidrive technology is implemented by Shimano to craft the main gears that are used in its reels. These newer Fluidrive II gears are larger as compared to their first-generation counterparts, and they are also wrap-polished.

The wrap-polishing performed on Fluidrive II gears helps to deliver better and more optimal smoothness to the reel in order to increase the efficiency of the angler when retrieving. The Fluidrive II feature also helps to bring along the added effect of increasing the overall life span of the reel itself, since it reduces the vibrations that get transferred to other parts of the reel and rod.

The Spirex 2500FG sports a propulsion line management system. This system is designed with a special spool lip profile, the design of which was crafted after a series of tests and computer simulations that exhausted all different kinds of casts that an angler may perform.

As you will notice, the result is excellent casting performance that few other reels in this class can offer. The spool lip also sports a near-frictionless line passage that provides the fisherman with easier-to-attain longer casts.

Wind knots and other issues, such as backlash issues, are also prevented due to this system.

The Spirex FG series of reels introduces yet another unique feature that comes in the form of Quickfire one-handed casting. This, as with the Fluidrive system, is actually the second iteration of the Quickfire system.

Shimano’s Quickfire II one-handed bail trigger allows the fisherman to open up the bail so that they can cast their rod with only one hand. Aside from this benefit it also allows the angler to do quicker turnarounds, resulting in even more casts with each outing.

Most reels sport a conventional round oscillation gear. While there is nothing very wrong with these types of gears, they are known to produce inconsistent rotor speeds more often than other types of rotors. That leads to uneven stacking of your line on the spool, which can lead to more issues down the line (no pun intended).

That is why the Shimano Spirex 2500FG comes packed with a Varispeed rotor drive. This feature is used very effectively by Shimano to provide the angler with a consistent and constant rotor speed that can help to perfectly lay the line even while retrieving.

This is achieved because Shimano crafted the oscillation gear in the Varispeed rotor to be oval-shaped, rather than completely round.

Can you use the Shimano Spirex 2500FG in Freshwater?

Does it come with an extra spool?

Is the Spirex 2500FG ambidextrous?

Yes, the FG series is ambidextrous and can be enjoyed by both right- and left-handed anglers.

Overall, the Shimano Spirex 2500FG is a wonderful choice if you are looking for a reel that can serve you well for fishing in light to moderate saltwater conditions. It is also great when used in freshwater conditions.

It functions very smoothly and also maintains a nice light weight that many anglers will enjoy, especially on longer outings. This reel can handle both braid and mono lines easily, so for those who want to have a reel that is flexible, this is a good choice.

If you’re looking for a spinning reel that packs a lot of value into an affordable package then the Shimano Spirex 2500FG is a good option for you to explore.