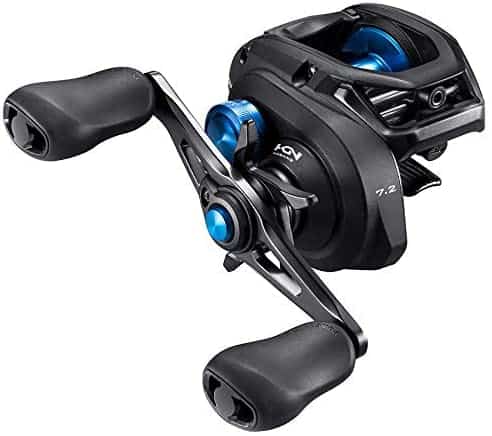 Those who have casted the Shimano SLX baitcaster have stated that it reminded them of classical reels, as it could consistently deliver the bait to the designated target with every cast. This is due to the centrifugal based VBS casting system.

The Shimano SLX reel is so well designed that every cast feels almost identical, effortless and quiet. This is because most of the Shimano products have features such as an X-ship design and spool which is Super Free to alleviate spool shaft friction while casting.

This baitcaster is designed to function as a workhorse and as such comes with multiple retrieval ratios. The 8.2 gear ratio is higher speed and it offers both left and right hand retrieval. Those who’ve tested the SLX state that they were able to use a wide variety of bait weights. It is especially adept at handling heavier things, but anglers have also found success with 1/8 ounce bait as well as 1/16 ounce. Of course, when using the lighter lines you’ll need to make sure the spool tension is dialed in properly.

When retrieving both lower and lighter resistant baits anglers find the SLX to be quite fluid. While this reel lacks the micro based gearing that is present in other Shimano products, it does use brass which is smooth and precision cut. Even when performing deep diving most anglers noted that the gear ratio didn’t manifest any type of gear bind. However, during the retrieval of bigger fish they did notice the difference.

Even with four pound fish many fishermen agreed that the SLX isn’t quite as powerful as other models. However, because its aluminum frame offers lots of gearing isolation rigidity, it can still battle the larger fish even without the presence of a micro module.

The baitcasters designed by Shimano are famous for their smooth versus maximum drag pressure. The SLX continues this legacy, utilizing a basic steel and carbon drag stack which is sandwiched between the main gearing of the reel. While there isn’t much surface area, that also means less room for failure. Lab tests confirm that the Shimano SLX was able to deliver an 11.1 pound drag pressure while under complete lock, which is nearly an ounce lower than other baitcasters.

However, while the Shimano SLX does not provide the same maximum drag that is found in competing reels, it has still demonstrated both reliable and smooth handling during real world application. Anglers have been able to use jerkbait to capture largemouth bass, and their reaction bite was excellent. They achieved this by dialing in the right drag adjustment, which combined with the harder settings enabled the reel to hook it, while still maintaining sufficient drag so that when the largemouth started to aggressively pull the fish were unable to utilize the lure in the form of leverage to shake off trebles.

The fish offered multiple runs which were extensive, but in each case the Shimano’s SLX’s smooth drag prevailed and provided a consistent and smooth performance, enabling fishermen to land almost every fish. This baitcaster also features blue colored anodized parts which give it character and style. It is much better looking than other baitcasting reels.

Quality ergonomics is a necessity in any baitcaster. The moment you pick up the Shimano SLX it has a feel which is both comfortable and familiar to anyone with prior angling experience. Its overall volume is roughly twenty percent smaller than competing brands, and it has a reduced angular profile that enables it to fit snugly into your palm. With regard to weight it has the advantage of using diverse materials between its side plates and frame so it is only 6.9 ounces. It has an extended handle which offers lots of leverage and the knobs are oversized which provide some added comfort.

The only ergonomic drawback is its VBS cast based control adjustment. As with other products offered by Shimano, it has to be internally adjusted. The majority of fishermen will basically set then forget its VBS brakes; however, those that prefer to make their adjustments on the fly find this feature to be a real nuisance because it interrupts their concentration while fishing. It should also be noted that a bushing is used to support the knob.

show
Application and Price
How to Use the Shimano SLX for Surf Fishing
Tackle and Bait
Related Posts:

Most who’ve tried the Shimano SLX consider it to be a great leap for the company, which many feel focuses too much on high end angling products. While previous products like the classical Caenan were quite functional, they lacked the needed refinement and wasn’t as fun to use. With the SLX Shimano has come full circle. Not only does it look the part, but its castings and retrievals are comparable to the Citica series.

Its side plates are designed with graphite composite, which isn’t the highest quality material on the market. However, at a price of less than $100, this is to be expected. While its profile and dark matte finish may be comparable to the Curado, it still has superb performance.

The Shimano SLX reel is built with twenty four ton carbon style blanks which utilize titanium oxide with a semi-micro based guide train to enhance its overall ratio and balance. It has a total of 9 casting rods with moderate power, 6’10” lengths that are fast action, as well as heavier power rods. This lineup is extensive and as such will cover a variety of applications,

How to Use the Shimano SLX for Surf Fishing

While many anglers consider surf fishing to be affordable and easy, this isn’t always the case. While no permit or license is required in many places, there are a number of other things that must be considered. For instance, the main obstacle you will face is the actual surf, which includes the strong currents and waves which can severely affect the presentation of your bait.

This is why experienced fishermen who use the Shimano SLX will develop extensive and high accuracy casts which work with the current rather than against it. One of the most popular places for surf fishing are the Bahamas, especially Eleuthera and Abaco. Species which inhabit this area include pompano, bonefish, grouper, jacks and barracuda.

Bonefish weigh between three and ten pounds, while some specimens can grow as large as fifteen pounds. These particular fish are challenging to approach since they can immediately detect your presence, and they’re quick. Barracuda also move fast and tend to inhabit the same areas as bonefish since that is their preferred prey. Barracuda have elongated bodies with teeth that are razor sharp, and can weigh as much as twenty five pounds with a length of more than six feet.

Pompano have flat bodies and can usually be found feeding near the surface in close proximity to the shore. They move about in schools and weigh between ten and twelve pounds. Jacks weigh around fifteen pounds on average and are easiest to capture at night since this is when they are most active. Grouper like to hang out near barrier reefs and occasionally fishermen catch them near rock piles and docks; they weigh between three and five pounds and are prized for their great taste.

The Shimano SLX, like most surf based rods, is durable and long. It can be used in calm waters and you can attach an eight to twelve pound test line, and the fly rods are best reeled using floating lines. Since most saltwater fish have sharper teeth, using leaders is extremely important. Leaders made from steel are highly recommended especially for anglers that intend to catch barracuda.

The best bait for capturing them is squid, crabs, shrimp, snails and worms. Additionally, barracuda are attracted to bait which uses interesting patterns like white, pale gold, tan or pink coloration. Surf fishermen need longer lures to get the bait to the places where these fish reside, since they won’t come near your boat.

Can this reel be used by those who are left handed?

The Shimano SLX is designed for both left and right hand users.

Does this baitcaster use an I-dc-4?

This baitcaster is the DC model, which means that it is a reel which uses the DC brake. This brake can support an array of lures such as vibrations, buzz bait and minnows due to its four easy to use settings.

For the price, the Shimano SLX is definitely worthy of consideration, particular for those who don’t want to spend more than $100. It is a great looking reel that can be used in a variety of aquatic habitats and it is excellent for both amateurs as well as professionals.