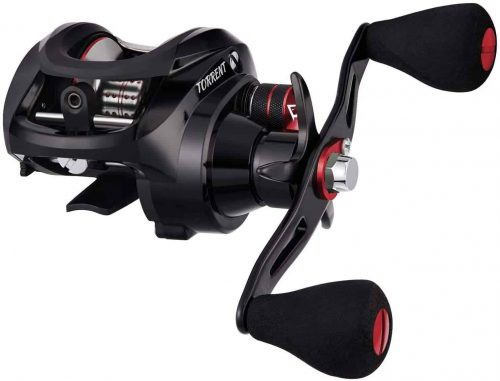 The Piscifun Torrent is designed to disrupt the baitcasting industry by providing an affordable yet premium quality angling solution. The manufacturer prioritizes lowering their circulation costs which results in competitively priced fishing gear. This reel has a number of characteristics and features which make it stand out from the crowd.

There are a number of things that anglers love about this fishing reel, one of which is the price. It can be purchased for less than $50, which is a great deal. When assessing the quality, it has been concluded that customers get outstanding value for the price.

show
Gears
Braking System
Reviews
How to Use Your Piscifun Torrent in Ponds
Can this baitcaster be used for slingshot fishing or saltwater bowfishing?
Can I place grease in the Piscifun Torrent’s lubrication port?
Related Posts:

One thing that has stood out to those who’ve tested this product is the gears. The primary gear is reinforced, which enhances both the strength and performance of the overall unit. The CNC type brass uses a precision cut with springs that are made from stainless steel. This means that professional anglers can have complete confidence in its gear operation, while also getting superb durability and water resistance.

There are few competing baitcasters in this price range which have gears that are reinforced. Furthermore, fishermen love the shielding which is included in the bearings. This shielding is important as it protects the reel against salt, particles and water. This means the Piscifun Torrent can be used in lakes, rivers and oceans without fear of malfunction.

Another innovative feature that was included in this baitcaster is the 60S based lubricant. This means that fishermen will no longer have to concern themselves with deconstructing this reel to apply oil, since the engineers at Piscifun installed the oil port near the spool. All you have to do is pour your oil into it. This alone makes this one of the best baitcasting reels on the market today. Those that buy it won’t have to worry about oiling the reel prior to going out on their fishing excursion.

Like most modern baitcasters, the Piscifun Torrent uses a magnetic based brake system with its aluminum spool. This offers anglers greater control and accuracy when performing casts. It is also outfitted with the spool knob tension which substantially lowers the chances of backlash, along with a dial-in style gauge for additional control. Even those fishermen who are happy with their existing reel will want to consider this product due to its many unique characteristics

While the Piscifun Torrent is competitively priced and extremely effective, it does have a couple of drawbacks which should be noted. The first of these is that unlike most baitcasters, it does not have ball bearings. Instead, it uses 5+1 shield style bearings. While some anglers don’t have a problem with this, others who’ve tested the Piscifun Torrent have stated that they felt the system was inferior to baitcasters that use ball bearings.

The second drawback is that the package doesn’t include oil. This appears to be a common issue with lower cost baitcasters and is probably a way for the manufacturer to save money. And while it is certainly not a major issue, customers should be mindful of the fact that they’ll need to pay extra to get it, which is a bit of an inconvenience. The lack of oil in the package is somewhat ironic given their 60S lubricant system. However, these are the only two issues that we found with this baitcaster and neither is serious.

Quality drag is an essential feature in baitcasting reels. One angler who tested the Piscifun Torrent stated that the drag is nice and smooth with brakes that function well. However, he also stated that its drum might tighten up periodically, but could be easily adjusted so that the device could work normally. He enjoyed the product so much that he stopped using his Bass Pro Tournament Baitcaster completely and switched to the Piscifun Torrent.

The Piscifun Torrent has over 3000 reviews on Amazon, most of which are positive. It has a 4.5 out of 5 star rating, which is excellent. The consensus among anglers who’ve never tried a baitcaster is that the Torrent is highly recommended for budget minded fishermen who want a good reel but don’t want to spend a fortune.

Customers are also pleased with the extended crank handle and aluminum based thumb bar, which offers superior control than the majority of baitcasting reels. Most felt that the absence of ball bearings wasn’t a significant problem since the Torrent worked well regardless.

How to Use Your Piscifun Torrent in Ponds

Ponds are one of the best places to hunt for fish, especially bass. Since ponds are usually smaller when compared to lakes, the fish will not be as scarce. Additionally, pond fish can grow just as large as their lake or river counterparts, which is the result of the lack of competition which is more prevalent in larger bodies of water.

When fishing in ponds you’ll want to follow the standard freshwater fishing rules, which include using correct cover, checking the water temperature and angling during the proper time of day. You’ll also need to select the right lure.

This is one of the best types of lures for ponds. The fish that reside in these habitats are used to consuming live prey such as tadpoles, insects, crayfish, worms and minnows, and are not as familiar with exotic stuff like poppers or spinner bait. As such, you’ll want to prioritize live bait and handle it in a manner where it lives longer and acts naturally.

For minnows you’ll want to place the hook underneath their mouth so it emerges from its “nose” or use a hook to pierce the center of its back, just beneath its spinal cord. In many cases you can capture live bait near the edge of the pond using either a small net or minnow bucket. Bring along a miniature trowel while digging for earthworms and then place them in containers that are full of shredded and wet newspaper.

While live bait is probably the best option for most pond environments, some fishermen don’t like dealing with it. In this case, artificial bait can still work, especially if they mimic shad or minnows. You can purchase hardened crankbait which resembles minnows or look for the popper lures which resemble the body trunk of minnows. Lipped crankbait might also work.

Crankbait works well in shallow or top water, according to Kevin VanDam, a champion angler. He recommends selecting lures which are designed for use in water which has a depth of twelve feet or under. Poppers can also be used, along with lipless crankbait, but lipped crankbait should be avoided as it dives too far down for the majority of ponds.

Can this baitcaster be used for slingshot fishing or saltwater bowfishing?

Yes, the Piscifun Torrent can be used for fishing in saltwater, but the reel should be rinsed using warm freshwater beforehand. Additionally, some anglers prefer to apply oil after their fishing trip, and use the thirty pound Berkeley style Tracer braid since it casts smoothly.

Can I place grease in the Piscifun Torrent’s lubrication port?

It is not recommended to place grease in the lubrication port, as it is designed for oil only. One of the best brands is “Reel Butter,” which is oil light in weight which is designed for reels.

Anglers who own both the Piscifun Torrent and Phantom X state that the Torrent is an excellent baitcaster that is designed to cast the mile whereas the Piscifun Phantom X is superior when it comes to retrieval and casting.

Can this reel handle a fifteen pound tuna?

Technically it can, but this isn’t something that is recommended, as this reel is primarily designed for lighter fish. While some anglers do report being able to capture specimens that weigh between ten and fifteen pounds, it isn’t really a good reel for larger specimens, and those that intend to catch them should invest in a more expensive baitcaster.

The Piscifun Torrent is a great introductory baitcaster for those that are just getting started with angling. It has smooth handling and the spool tension and start drag are excellent. However, it is best used for capturing small to medium sized fish, because although some anglers have been able to use it for larger catches, this will wear it out. Additionally, some have reported that they experienced intermittent issues involving its thumb button where the spool would lock up after a cast was made. This is a known issue among these reels and Piscifun is aware of it, but otherwise it’s an outstanding product.