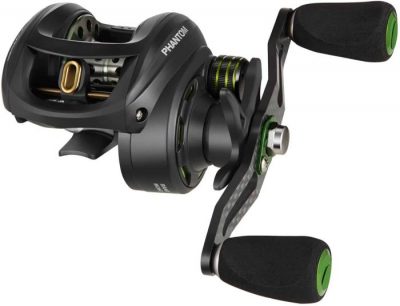 The Piscifun Phantom is one of the world’s premier baitcasting reels. It weighs just 5.7 ounces and uses a body and frame made from carbon composite, with a handle made from carbon fiber and an aluminum spool which is hollowed out. Each gear is made from anodized aluminum which has been hardened and it has a carbon based drag system which is capable of pulling a maximum of seventeen pounds.

It has a centrifugal brake system that uses ten magnetic settings, six pin and seven ball bearings. Many anglers are dazzled by its smooth operation especially when casting and the thumb bar is robust with a retrieval that is exceptionally smooth. Many competing baitcasting reels are loud and sloppy but not the Piscifun Phantom.

It is versatile and can be used for roll casting within shallow water along with tossing bigger baits inside deep water. Fishermen report being able to capture fish with paddle tail type swimbaits (3/4 ounces), Senkos, jigs and spinnerbaits which are ½ ounce, all without trouble. One of its best features is the dual brake system, because it gives you the perfect setup for casting. Since no two anglers cast in the exact same way, each can calibrate the reel to their liking.

Piscifun was launched in 2013 by two friends who were passionate about fishing. It focuses on providing premium quality fishing gear that is affordable, as well as lowering circulation costs. Their strategy has enabled clients all over the world to equip themselves with reputable fishing gear without spending a fortune.

The term “Pisci” is taken from Latin and is a reference to fish. Peter and Ben, the company founders, have more than twenty years of experience when it comes to the manufacture of fishing related equipment and some of their products are supplied to other famous brands. Piscifun has developed its own design capabilities, and by traveling to diverse environments such as Florida, New Zealand and Malaysia, the brand has been able to develop gear which can handle a variety of scenarios.

The company is known for prioritizing the needs of customers and developing the products they need. To this end, they collaborate with professional fishermen the world over to gain deeper insight and knowledge regarding what angler’s desire. This results in high quality yet affordable products.

This baitcasting reel uses a 2 brake system, one which is on the inside, and the second which can be found outside. The internal centrifugal brake can be set to one and the fishermen may then adjust its magnet brake to level two so that it works better with the wind.

Reels which use an internal braking system provide greater control when it comes to casting setup. Anglers can differ greatly when it comes to their preferred casting method, and the Piscifun Phantom can be modified in any way you like. Depending on the type of fish you’re going after, you might decide to change the brake.

The centrifugal brake in this baitcasting reel is six pin, which gives fishermen the ability to finely tune it in a manner that greatly increases its casting distance and accuracy. The magnetic brake makes adjustment more precise, which will allows anglers to use different types of bait while preventing backlash.

A general rule of thumb followed by veteran fishermen is to set the reel’s internal centrifugal brake so that it has the same weight as the lure, while the external brake can be set to the level of wind that will be present while casting.

This Baitcasting Reel Provides Outstanding Value for the Price

Fishermen who have tried the Piscifun Phantom for a few months have complimented its matte dark finish, and report that they will regularly carry it with them on fishing trips. It has a solid feel, looks the part and performs as advertised.

A number of startup reel companies have emerged in recent years, and although their products are affordable, they’ve also been a mixed bag for anglers. The Piscifun Phantom is an exception. Despite its affordable price tag few negative issues have been reported, other than nuts or screws which were loose or a misunderstanding regarding its dual brake system.

show
Carbon Based Fiber Drag
What is the best test line?
Related Posts:

This baitcasting reel has a strong carbon based fiber drag mechanism which can deliver a maximum of seventeen pounds worth of drag that is consistent and smooth throughout its entire range. This is a high speed reel that is constructed with main gears which are hardened and double anodized for superior durability.

The aluminum used in the Piscifun Phantom is the same variety used in airplanes. Not only does this provide performance which is more consistent, but you will also get a gear system that is highly efficient. It is light in weight with gears that are extremely precise.

When it comes to baitcasting reels, heavier is not always better. Those who plan on fishing for long periods of time prefer lightweight reels because it doesn’t tire out their hands and wrists as fast. The Piscifun Phantom is superb, because it only weighs 5.7 ounces which makes it ideal of extended fishing sessions, but because it is constructed with a carbon fiber based frame, handle and side plates durability and strength are not sacrificed.

This reel uses a line guide made from titanium which is oversized and positioned away from its spool to reduce the friction of the wire while maximizing casting proficiency. It also uses hollow CNC spool that is aircraft grade and which starts and then accelerates much faster than bigger spools, resulting in better line handling and superior luring when compared to standard sized baitcasters.

Is this baitcasting reel good for salt water?

The Piscifun Phantom is designed to be used in rivers and lakes which have freshwater. It is therefore not recommended to use this reel in seawater, and if you do it is important to disassemble, clean and then lubricate it afterwards, otherwise the salt might corrode its gears.

What is the best test line?

Experts recommend using a forty pound line that is braided or a twelve pound mono with the internal brake set to two and the external brake set to seven. With the Piscifun Phantom it isn’t always necessary to use your thumb and it rarely backlashes.

Which technique works best with this reel?

This reel is designed for baitcasting and many who’ve tried it were so impressed that they stopped using spinning reels. It is ideal for capturing freshwater fish and can used for various lures, worms and baits. It is highly accurate and exceptionally well-tuned.

How well does this reel cast lighter lures?

Those who have worked with the Piscifun Phantom state that 3/8 ounce lures are the best. Those who have tried 1/8 or 1/16 ounce lures have reported that it doesn’t perform as well. This baitcasting reel is extremely adjustable and many veteran anglers who own more expensive reels state that they still prefer using this one due to its light weight.

Can the Piscifun Phantom be used for Lake Trout and Salmon Jigging?

While this is a great reel, it probably isn’t a good idea to apply it to deep aquatic jigging. It is better to use round reels for this, such as the Piscifun Chaos.

Piscifun has certainly distinguished itself when it comes to their baitcasting reels. The Phantom is outstanding for the price and is perfect for tossing jigs and other types of baits. However, some fishermen have stated that they did notice a slight performance drop when using baits heavier than ½ ounce, because the control knob for the spool wouldn’t tighten adequately to prevent the jig from falling too rapidly.

Others have also mentioned that sometimes when casting the line will spool off too fast which resulted in what they called a miniature backlash, where the line would exit its spool and then wrap around it and make the cast suddenly stop about twenty five feet away. Still, this is an amazing reel so long as it is not used for tossing heavy lures.