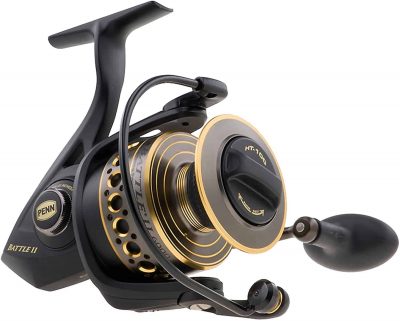 Finding a spinning reel that can serve you best in all different types of uses is essential in having a satisfying outing every single time you go out fishing. A dependable spinning reel is especially important when you are up against a big catch, and the Battle II & III spinning reels from Penn are some of the greatest options on the market.

Both of these reels are crafted by Penn with both durability and performance in mind and are renowned as some of the very best reels you can get for medium to big fishing. The Battle reels that Penn offers sit in a very comfortable spot in terms of offering quality, durability, and value all in one package, and managing to balance each almost perfectly.

Take a moment to read up on the features that the Penn Battle II & III bring to the table, and see whether or not these are the right reels for you and what you are looking for. In-depth features as well as frequently asked questions will be covered throughout this article.

The Battle series is one of Penn’s most popular reels, and after taking a moment to look at the features that these reels pack it is easy to see why so many adore them.

We will begin with the Penn Battle II. This reel packs a full metal body along with side plates to match and features a beautifully crafted machined aluminum spool (which is also nicely anodized). A typical 5+1 bearing system of fully stainless-steel bearings is also featured in the Battle II.

The Penn Battle III is another great offering that builds upon the success of the Battle II and adds multiple new features to boot. For starters, it comes packed with CNC Gear technology and an HT-100 carbon fiber drag system, while still featuring an entirely metal body and side plates.

Both of these reels feature the superb Superline spool, helping to cement them as two of the premier reels that can be used in the current day.

Both the Penn Battle II and the Penn Battle III feature this fantastic spool design. This feature is wonderful as anglers will be able to quickly see how many lines they have remaining on the spool of their reel.

All you need to do is take a quick look down at the easily distinguishable line capacity rings included on the Superline spool and you will immediately know how many lines you have left.

Another great feature that makes the Superline spool such a great tool for anglers is that it is entirely braid ready. The tailored rubber gasket that fits around the Superline spool is also a very useful facet of the reel as it keeps the line from slipping or shifting.

This element comes in handy when you choose to load the spool with mono.

Another unique feature that the Penn Battle spinning reels boast is their HT-100 Carbon Fiber Drag System. This is one of the best features that a reel can have especially in a saltwater fishing environment.

Saltwater fishing requires a bit of drag so that you have a bit of wiggle room to work along with the fish rather than against it, and the HT-100 drag system is there to ensure that you are able to pull any maneuver off easily.

The high-quality carbon fiber drag washers contained within the HT-100 drag system are manufactured using Penn’s very own grease formula in order to ensure that every single catch you make reels in smoothly and efficiently, even if the load is very heavy.

The HT-100 carbon fiber washers are designed to last you as long as possible. They are touted to support over 100 miles of line running off of the reel without any wear or tear on the washers themselves. That’s some great news for anglers who find themselves out fishing very often.

Full Metal Body and Side Plate

Both the Battle II and Battle III reels are renowned for their durability and longevity, and a big portion of such praise can be attributed to the well-crafted, sturdy, and durable body and side plate of the reels.

While the full metal body and structure of the Battle reels may add a bit of extra weight, the performance and resilience that is achieved because of the metal construction truly make it a worthwhile sacrifice.

Not only does this framework keep your reel in the best condition possible it also assists in keeping your gears very well protected and in line. Having proper gear alignment is essential, and the full metal body and side plate help to make sure your gears stay aligned for as long as possible.

This special technology is implemented in the best way possible by Penn and is not available with the Battle II, rather remaining exclusive to the Battle III.

Utilizing some of the most state of the art and modern art software alongside CNC machinery Penn has managed to produce drive and pinion gears directly cut from the metal. The Battle III’s gears beat out typical gears which are crafted out of molds.

The best part is that accuracy of your gears will not be affected even in harsher environments and sub-par conditions – making this a must-have feature for anyone who fishes in formidable conditions.

Penn also packs both of these Battle reels with stainless steel bearings, helping to ensure that they are protected from the elements and will last you a very long time. The great thing is that not only do you get very high quality bearings, but you get a feature that can assist in casting.

The anti-reverse system built into these reels is fantastic as it cuts out any back play in order to make casting as easy as possible on the angler. This is achieved through the use of a one-way bearing.

The paint quality of a spinning reel is an often-overlooked feature that not many people pay attention to, however, it is worth noting that the Penn Battle II and III both features very good quality paint.

Both of these spinning reels are covered in high-quality paint that protects them from damaging saltwater and other types of chemicals that may lead to corrosion. This feature along with the already sturdy body build ensures you will get a lot of use out of your Battle spinning reel before ever seeing any wear or tear.

Can you use the Penn Battle II and III in Freshwater?

Most certainly you can. The weight of these reels makes them especially good against medium to big fish, and these are most often found out in saltwater environments. But if you find that the weight of the reels is not an issue and desire to benefit from the other great features that the Battle II and III offer then you can get some great performance out of these reels in freshwater environments against smaller to medium fish.

Do these reels come with a warranty?

Are the Penn Battle II and III spinning reels ambidextrous?

The Penn Battle II and III are wonderful spinning reels that can be used by both experienced and beginner anglers in order to get some of the best performances possible with little to no effort.

If you are looking for a reel that is both reliable and built to last then the Battle II and Battle III are some great options that any aspiring angler should take a look at. You get smooth drag, resilient and sturdy build quality, and a really great looking reel that will last you for years to come.