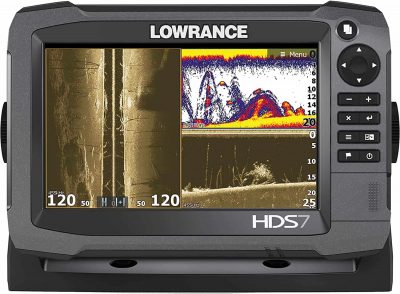 Whether you fish for recreation or make a living on the tournament circuit, the Lowrance HDS-7 Gen 3 is a top-tier fishfinder and chartplotter. Not only does it include pre-installed maps and charts for inland and coastal waters, but it features the the largest list of compatible transducers and electronics. The HDS-7 provides an unparalleled angling advantage, no matter if you are on inland freshwater or wide open coastal salt water.

The Lowrance HDS-7 Gen 3 is an extremely versatile fishfinder and chartplotter that is designed to work with a large array of common transducers. The HDS-7 Gen 3 is the most advanced fishfinder and offers plug and play ease with StructureScan HD and 3D models, SiriusXM NOAA radio, and even trolling motor autopilots. The Lowrance HDS-7 is an extremely valuable force multiplier for your effectiveness on the water.

The most common questions about units like these are based around what components or equipment come in the box, and what it lacks. Take a look below to find out exactly what you get.

There is a laundry list of features that the Lowrance HDS-7 Gen 3 comes with. Here, we will show you a quick rundown of some of the most useful or unique features.

Drawbacks of The Lowrance HDS-7 Gen 3

During our research, we really only found one downside to the HDS-7 Gen 3. That drawback being the lack of first-time install hardware. If you are installing the HDS-7 on a console that has not seen any previous installs, you will need to buy a bracket, or have the flush mount cutout done by an installation agent.

How to Use The Lowrance HDS-7 Gen 3

Operation of the HDS-7 is fairly straightforward. Once you give the power button a short press, the unit powers up and provides you with an initial system controls menu, allowing you to begin any number of functions, put the unit in standby, or power the unit down. It is from this screen that you will set your initial charts and data set overlays. Once you leave this menu, you are taken to your main data overlay, and you are ready to hit the water.

Who Should Buy The Lowrance HDS-7 Gen 3

The Lowrance HDS-7 Gen 3 is a great choice for novices, moderately skilled recreational anglers, fishing guides, and tournament fishers. For recreational fishermen, it can take some of the mystery out of learning to read underwater structure, and lead to more fish in the livewell. For guides and tourney circuit fishers who are already familiar with effective fish hunting techniques, this tool can help pinpoint that crucial piece of structure or that elusive shelf drop where you find that monster that tips the scales. It truly has something for everyone.

You can easily find large numbers of detailed reviews on the Lowrance website and even Amazon. The majority of these reviews are overwhelmingly positive. Many customers point out the surprisingly bright and clear screen, the ease of customization, and the overall quality of the data visualization. Other well loved features include the screen responsiveness, the functionality of being able to control the trolling motor route, and the internal GPS antenna.

The fishfinder and chartplotter market is highly competitive, and Lowrance has entered another top-tier product with the HDS-7 Gen 3. The huge library of features, preloaded maps and charts, and high degree of compatibility make this unit an invaluable addition to your onboard electronics. Whether you only get on the water when your busy schedule permits or if you are on the water fishing competitively week after week, the HDS-7 will give you an unmatched view of the water beneath you, and allow you to work that water more effectively than ever.