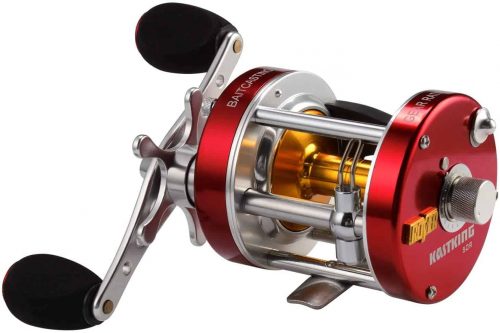 The Kastking Rover Round baitcasting reel is well suited to catching salmon, striped bass, steelhead and catfish. It is one of the highest rated baitcasters on the market due to its reinforced metallic body, fabulous appearance, efficiency and strength. It uses a carbon fiber based drag system with a Cymbal washer that enables it to haul a maximum of thirty pounds.

The proprietary MaxiDur ball bearings are made with stainless steel, and it is reinforced further using aluminum anodized side plates which are hardened and thicker than competing products. Its spool is CNC machined, the metal equipment is licensed and it is exceptionally accurate with a steel shaft that is hardened and nearly impervious to corrosion.

This baitcasting reel can be used in salt or freshwater. The EVA style handles are large and non-slip and it also features a line out type clicker alert with a spool thumb bar that is simple to use. It has a stylish red/grey color which will stand out when you’re fishing with friends or participating in competitions.

Kastking is one of the most respected names in baitcaster design, and the Rover Round is a perfect demonstration of this. It has an extended line capacity which makes it perfect for both monofilament and braided lines.

show
High Strength Worm Shaft
Smooth Handling
Clicker Line Based Out Alarm
How to Use the Kastking Rover Round to Capture Walleye
Related Posts:

The Kastking Rover Round features a worm shaft that is made with stainless steel. This smooth and tough material provides outstanding resistance to rust as well as unmatched power and performance.

Because this reel is made with deep race style ball bearings which are premium shielded, its operation is incredibly smooth. Both amateur as well as professional anglers will enjoy using it.

Clicker Line Based Out Alarm

The Kastking Rover Round uses the clicker line based out alarm which works in conjunction with a centrifugal style brake system which will provide continual and even pressure for every cast.

All these features make this the perfect baitcaster for capturing carp, large catfish, walleye and various saltwater specimens. The gears are made with precision brass while its level wind is flawless. This combined with the ergonomic bar thumb and robust construction makes it a great multi-purpose tool.

How to Use the Kastking Rover Round to Capture Walleye

This baitcaster is designed to capture fish species such as walleye, which are predatory and consume various types of organisms, including salamanders, snails, crayfish and insects. If food becomes scarce, the fish will become opportunistic and prey on anything which is available, which presents many opportunities for aspiring anglers.

Walleye have excellent olfactory capabilities along with superb hearing and eyesight.  They are typically found in the deeper water by day, but will come to the shallows to hunt during the evenings. This is why experienced anglers often prefer catching them at night.

The Kastking Rover Round can only help you capture these fish if you choose the right bait and lure. A common mistake made by amateur fishermen is spending a bunch of money on a fancy baitcaster without actually taking the time to learn how to use it. Because walleye have such a broad diet, a number of lures can be used to catch them.

One of the best is minnow plugs about five inches long, which work in water that is shallow. Deep dive crankbait and spoons will attract strikes from the fish which are moving about in the depths. Furthermore, live minnows, earthworms or shads are extremely attractive to walleye. Because these fish are nocturnal, you’ll want to hunt them after sunset, but the next best time is during cloudy or overcast days where the fish may come up to look for food.

It is important to attach your Rover Round to the proper rod. This should be a baitcaster type rod that is usually identifiable via the plastic piece which is shaped like a trigger which hangs beneath its reel seat. You’ll also want to make sure that the rod and reel can manage your chosen fishing line. Check the manual to find out precisely how many yards it can hold, and inspect the rod’s side above its handle to see how many pounds it can handle. The reel/rod combination should be balanced and comfortable when holding it with your hand.

The drag of the reel must also be properly set. If it’s not, you run the risk of having a large fish snap the line, and if too loose you won’t be able to properly set its hook. Before starting your fishing session, perform a steady and firm tug on the line between your first rod and reel. If everything is correct, the line will come off its reel. If not, you’ll want to loosen its drag. If you notice that the drags comes off too easily, then tighten it. For loosening its drag you’ll want to spin its star shaped part which can be found on the reel handle. Turning it counterclockwise should loosen its drag.

Like most high end baitcasting reels, the Rover Round uses a magnetic based resistance system. Its purpose is to minimize the likelihood of backlash when it’s tightened, and enhance its casting distance after loosening. The resistance will be controlled via a dial which can be found on the reel’s side, usually opposite from the handle. When you turn it clockwise, the resistance will increase while turning counterclockwise will loosen it.

The best way to inspect the resistance is by connecting the lure at the fishing rod’s end and then click on the thumb bar. Let your lure fall and if it hits the ground without making the reel backlash, you’re good to go, but if backlash occurs you’ll need to boost the resistance. While all this may seem complicated at first, once you become accustomed to casting the Rover Round you will do it automatically and with enough practice will become adept at making long casts.

While the Kastking Rover Round will work with just about any lure, they are specifically designed for situations where anglers wish to quickly reel the lure in. The reason for this is because of the gear ratio which is 6.0:1, meaning that every reel revolution will pick up additional line when compared to reels that have gear ratios which are lower. This means that this reel is well suited to faster moving lure such as lipless crankbait, buzzbait and spinnerbait.

Spinnerbait in particular is the lure of choice in places that have a nice wind roiling along the water’s surface. The reason for this is because this bait will vibrate and flash in a manner which will attract the fish, and works well even near vegetation. You can also alter the bait retrieval speed.

How fast is this reel when operating in the deeper depths?

It depends on the variant you purchase. Owners of the R-60 have stated that this version does not have higher speed retrieval, especially when used with a thirty pound test large game mono. However, it is strong enough to haul in fish that weigh from forty to eighty pounds at depths of twenty five to sixty feet, so this more than makes up for it.

How Much Thirty Pound Braid Can This Reel Hold?

The Rover Round 60 can hold about three hundred yards worth of thirty pound braid, which is more than enough for most anglers.

How well does this reel handle large river catfish?

The Kastking Rover Round can be used in salt and freshwater habitats, and according to those who’ve used it they were capable of dragging and tiring out catfish which weighed thirty pounds.

Is this reel good for retrievals and casting, or only bottom fishing and trolling?

This reel is great for casting twenty to twenty five pound test lines and users have the option of removing the level wind.

Can this reel be used by left handed users?

Yes, the Rover Round can be used by left and right handed users.

What is the maximum mono cap that this reel can hold?

The Rover Round 50 holds almost two hundred yards depending on the line diameter.

Though this baitcasting reel is more expensive than its competitors, it is worth it. The Rover Round 60 in particular is excellent due to its push bar which is used for casting. However, some users have reported that it is a bit noisy during retrieval and casting, even after lubing the internal parts, but the construction is sturdy, the drag is excellent and casting is straightforward so long as you set the tension correctly for the weight and bait you’re using.