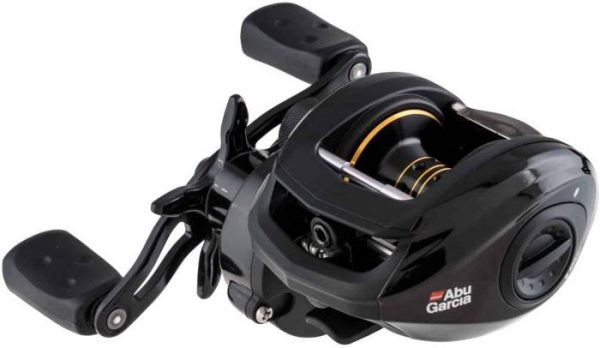 The Abu Garcia Pro Max is widely regarded as being one of the world’s best baitcasting reels. It has a foot which is recessed that can be found on the lower portion of the rod which maintains the alignment and balance.

It is light in weight and will fit snugly into the palm of your hand. Unlike lower quality reels, which wear out the hands and wrist after an extended fishing session, it has a double arm type handle which is bent with a star drag that sits in close proximity to its reel. This makes it easier to adjust and the paddleboat grip is EVA grade and high density which results in a robust hold even in the toughest situations.

show
Weight and Appearance
Build Quality
State of the Art Braking System
Smoothness and Speed
Casting Accuracy and Distance
Line Capacity and Power
The Drag System
Superior Ball Bearings
High Precision Adjustments
What is the line capacity?
Can this reel be used by left and right handers?
How does the Pro Max 3 differ from the Pro Max 3-C?
Does it feature the flipping switch?
What is its maximum pull weight?
Can the Abu Garcia Pro Max be used in saltwater?
Related Posts:

With regards to weight, this baitcasting reel is moderate. It is not the heaviest reel on the market but it also isn’t the lightest. It is low profile and lacks unusual protrusions and indentations which might increase the weight unnecessarily while reducing comfort. Visually, it is mostly black in color with some golden areas.

The Abu Garcia Pro Max uses a graphite style frame on its side plates which provides a solid feel. It is free of unnecessary flex and the reel is light. When you study the reels closely, you’ll notice the excellent job the engineers did in fitting all the graphite parts together. It has seamless transition points which is important because it ensures all the gears are aligned when producing cranking power. However, not every part is made from graphite.

Aluminum which is double anodized is also used in the spool and reel handle because this metal provides tremendous strength while being resistant to corrosion and wear. Additionally, the spool is assembled in a manner where excess weight is removed. The third material found in this baitcasting reel is heavy duty level brass which is both attractive and durable, ensuring that fishermen will be able to use this product for years to come.

State of the Art Braking System

The Abu Garcia Pro Max has an external brake adjustment that can be found near the side plate which assists anglers in making rapid casting adjustments. Like other high end baitcasting reels, its braking system incorporates magnets which maximize its performance.

Fishermen have reported that when casting with this reel it provided continual resistance to the spool. The incidence of backlash was significantly reduced especially when the thumb and magnetic brakes are utilized.

Furthermore, anglers will receive a higher line retrieval rate which allows them to use diverse baits like spinners, buzz and lip-less style crank. The reel is smooth, allowing the operator to pull back the line with very little effort. Even in situations where the reel is under great pressure, the Duragear will ensure that it remains aligned and smooth during retrieval.

Unlike lower quality reels, the casting capacity of the Abu Garcia Pro Max is not compromised due to its usage of ceramic based line guides. These guides ensure that the line is evenly distributed throughout the spool. The design of the spool along with its line lay greatly increases the casting distance.

Those who have worked with this baitcasting reel have noted that level wind is wide enough to prevent interference in the cast, because of the extra line friction. In situations where you need to make moderate adjustments to its spool tension, you’ll be rewarded and capable of flinging a larger variety of lures which are weighted.

Accuracy plays a key role in the performance of baitcasting reels. This product is exceptional in this regard, even for shorter casts that need a bit of technical knowledge and finesse. It has a thumb clutch which provides extra assistance and the reels designed by Abu Garcia also incorporate their proprietary Rocket Line Management System that allows extended casting distance and wind knots reduction. Anglers who’ve tested this reel have said that it worked perfectly without ever becoming stuck. The reel is simple to use and both amateurs and professionals alike stated that they became acclimated to it after just a few casts.

While the Abu Garcia Pro Max has considerable cranking power, its high gear ratio means that the level of power it generates is limited. This shouldn’t cause too much concern since most other baitcasting reels are similar. The reel provides sufficient lifting power to haul in most medium to big freshwater fish.

The drag system used in this baitcasting reel is high end. It incorporates a proprietary Power Disk mechanism that utilizes synthetic based washers. It is so effective that they can provide up to eighteen pounds worth of maximum drag pressure. Most experts agree that this is more than enough power for the majority of fishing environments and scenarios.

The star drag based adjustment can be found alongside the handle. It offers an audible and ornate drag adjustment via fine increments. Post drag engagement, the spool will be under continual pressure as soon as its cast, until you reel in your catch. Some anglers have reported that they did notice its drag pressure becoming a bit jumpy during extreme limits, especially when fish attempted to alter their direction. Fishermen can utilize deep dive lures or fine techniques to account for this but the reel might not be well suited to this task.

When it comes to baitcasting reels, the general consensus among experts is that more ball bearings equal smoother operation. It therefore comes as no surprise that the Abu Garcia Pro Max has a multitude of them. They are superior in quality and provide a level of smoothness that few reels can match.

In fact, those who have extensively tested this reel have stated that even after performing over 1200 casts, they didn’t experience a single backlash. The retrievals were also quiet, and while this doesn’t mean that backlash will never occur, it is clear that its incidence is extremely rare. This combined with its anti-reverse and instant characteristic means that it can confidently be used during tournaments and other competitions.

Anglers who’ve adjusted the spool based tension knob and drag of the Abu Garcia Pro Max have stated that they heard the recurring sound of clicking for each movement. This is extremely important, because it aids in performing high precision adjustments. This is exactly what you’d expect in a high end baitcasting reel, and demonstrates the design prowess and attention to detail that is inherent in this manufacturer.

What is the line capacity?

It depends on your chosen line. It is best to read over the specs, but some users report using one hundred and fifty yards of sixty five# power pro based braid for their frog fishing.

Can this reel be used by left and right handers?

Yes, it is sold in left and right hand versions, but the left handed models cost more since fewer are made.

Does it feature the flipping switch?

No, this baitcasting reel does not use the flipping switch.

What is its maximum pull weight?

It depends on your line strength. Some users have a thirty pound test line, which would enable them to capture large fish. For the gears, they are exceptionally smooth and capable of handling a twelve pound fish with ease.

Can the Abu Garcia Pro Max be used in saltwater?

No, this reel is designed for freshwater, but Abu Garcia also makes an outstanding inshore reel that costs about the same price.

The premium materials utilized in the construction plays a key role in the durability of this product. The reels are designed in an intelligent manner which means that when properly cared for they will remain viable for many years to come.

Unlike other reels, which require periodic repairs or high maintenance costs, the Abu Garcia Pro Max is simple to maintain. The reason for this is because its brass gears which offer outstanding resistance against corrosion. The aluminum is tough and can withstand the most rigorous conditions.